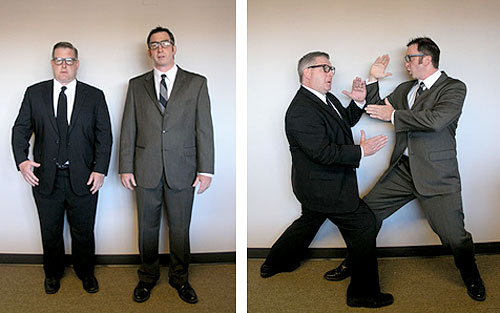 Two Wall-to-Wall Studios (W|W) Partners, Mr. Nesbitt and Mr. Werner, attended the Pittsburgh Advertising Federation's May 21st event entitled "Mad Men". This "members only" networking event was developed for the regions top advertising movers and shakers, none of whom dressed in costume with the noticable exception of Mr. Nesbitt and Mr. Werner. Undeterred by their obviously socially awkward appearance, Nesbitt and Werner worked the room with what can be only described as an "unprofessional and cliché riddled" demeanor. The duo were consistently met with blank stares and polite smiles with conversations often ending abruptly with attendees making trips to the buffet, bathroom or just walking away. When asked to comment on the evening, Nesbitt turned to his imaginary assistant, asked for the Henderson file and requested to have his calls held.