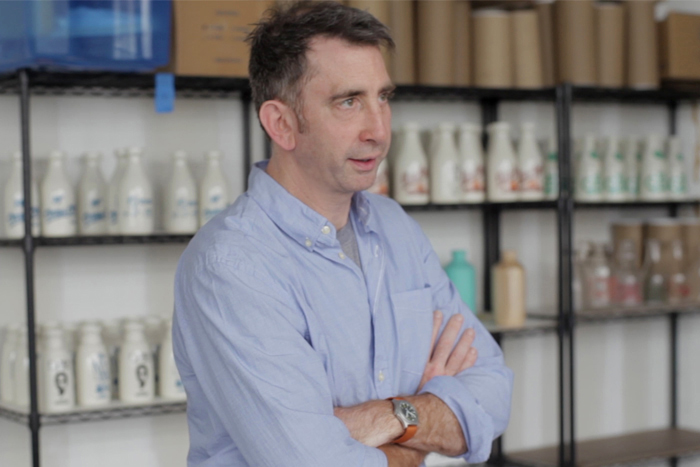 Larkin Werner, partner & creative director at Wall-to-Wall Studios, designed a series of 3 branded milk bottles for the Have You Seen Me? project. Have You Seen Me? is a work of contemporary art that transforms the iconic 1980s “kid on the milk carton” missing person advocacy campaign into a memorial for Africans who were lost during the Slave Trade. The project has exhibited at the Society for Contemporary Craft, The Pittsburgh Center for the Arts, and The Andy Warhol Museum. The project will be exhibiting at the American Museum of Ceramic Art in Los Angeles County November 2015 through March 2016. The initial two hundred and fifty vitrified porcelain bottles took over two years to produce and are made of raw materials from the English China Clay Co., Cornwall England. Each bottle is permanently limited to editions of 50.

The project maps the milk bottle design and manufacturing arms race of 1800's-1980's U.S. dairy farmers onto an alternate past where the historical European obsession with Chinese porcelain manifests itself within fully industrialized and literate African states.

The fictional dairies on each bottle draw on this speculative African time in order to come to life. The images of missing people on the bottles, however, are all too real and are drawn from historical slave archives. The project engages African first language speakers to develop historically accurate names for the people on the milk bottles (whose actual names have been lost to slavery), as well as to translate the text for Have You Seen Me?.

As each new series of bottles engages with new translators it also engages with new visual designers and design firms to create believable brand identities for each of the fictional farms on the bottles. This aspect of the project allows for the fiction and the reality to flow back-and-forth through a framework of familiar visuals and intentions.

Werner approached the design challenge for the project from a branding perspective, using historically accurate and influenced typefaces, iconic Americana pictorial vernacular and production methods. Have You Seen Me? was created by Pittsburgh-based artist Alexi Morrissey. "Working with Larkin”, reflects Morrissey, “had a permanent structural effect on the project. Beyond great design he quite simply created the rough template for approaching new (design) firms for collaboration. He brought such an immense knowledge of the historical practice of mid-century U.S. advertising and visual design that when I asked him to treat these fictional dairy farms as clients he got it right away. This is the kind of loyalty to fictional characters that great writers have, and Larkin not only gracefully navigated the collaboration with me but he was able to give shape to the alternate history in a way that gives a dignified platform for the real missing slave." View video of Werner talking about the project.

The project has launched a Kickstarter campaign to help fund a mass production porcelain facility and immediately double the size of the current collection from 250 to 500 bottles. Like the historical milk containers it mimics, the artwork is intended for the domestic space where real, everyday people live. This memorial to slavery depends on the involvement of a widespread group of people - not just for the funds to continue production, but for the housing of the bottles. The memorial is the network of bottles in our homes. 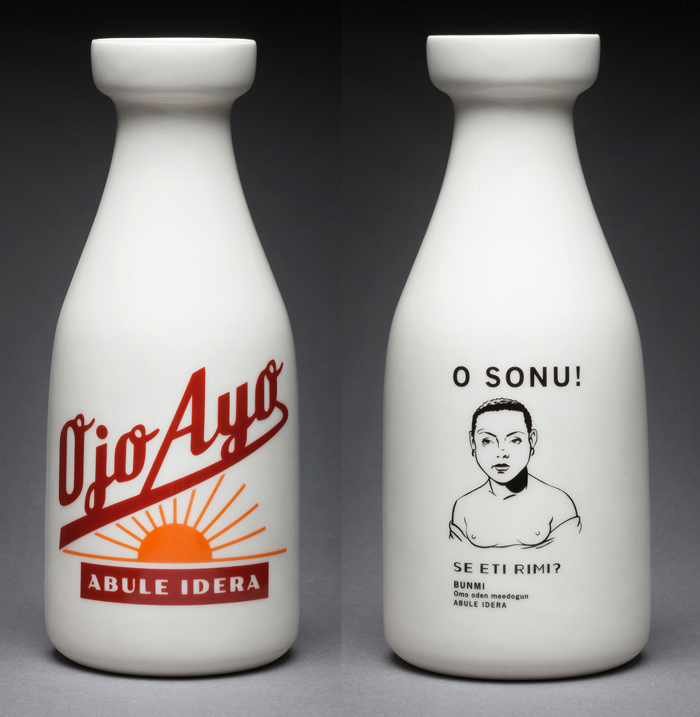 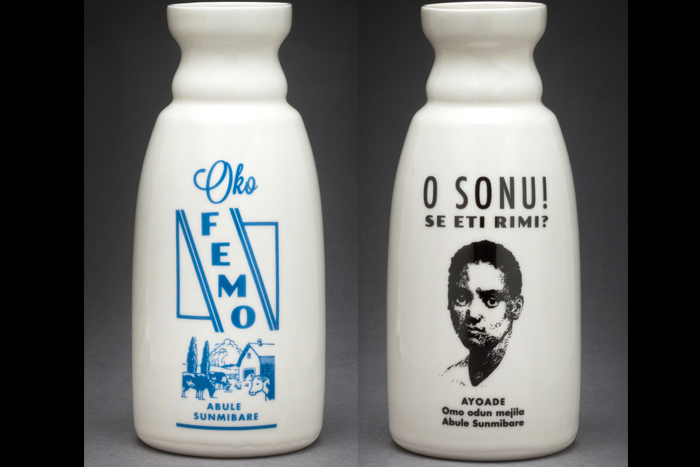 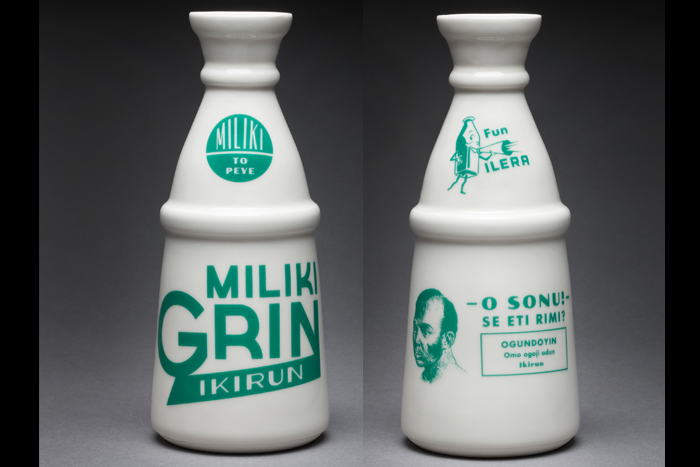 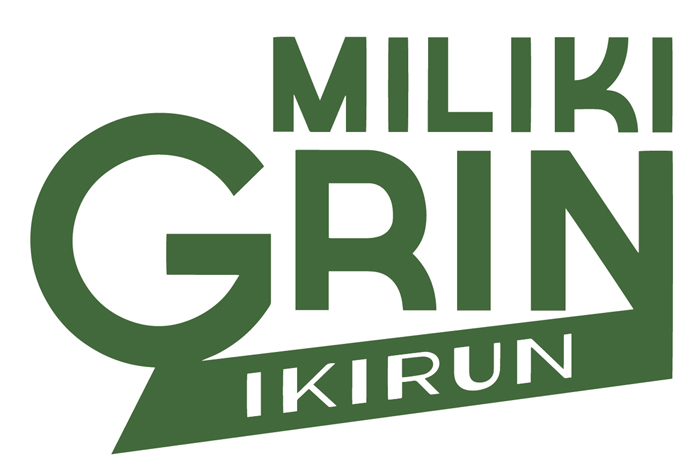 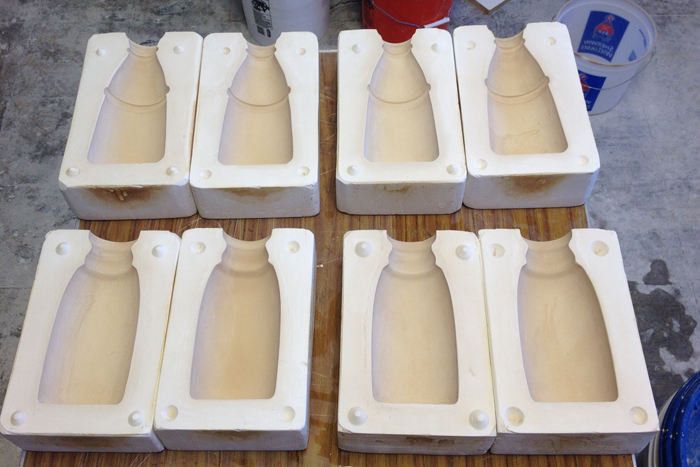 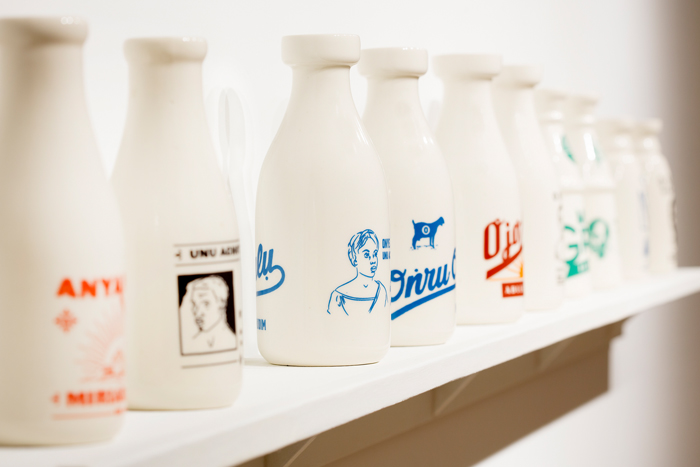 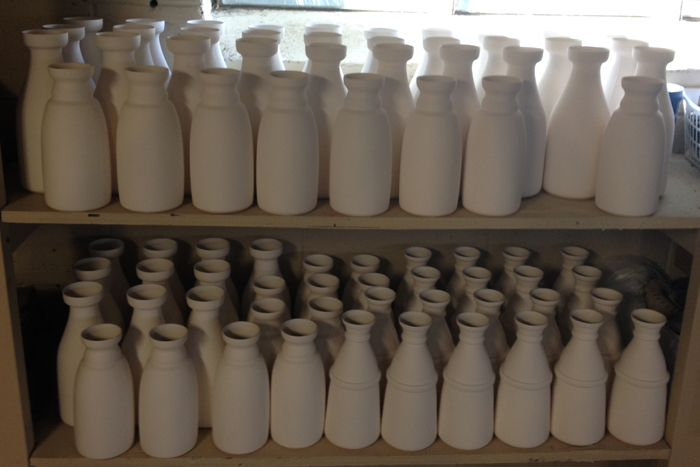 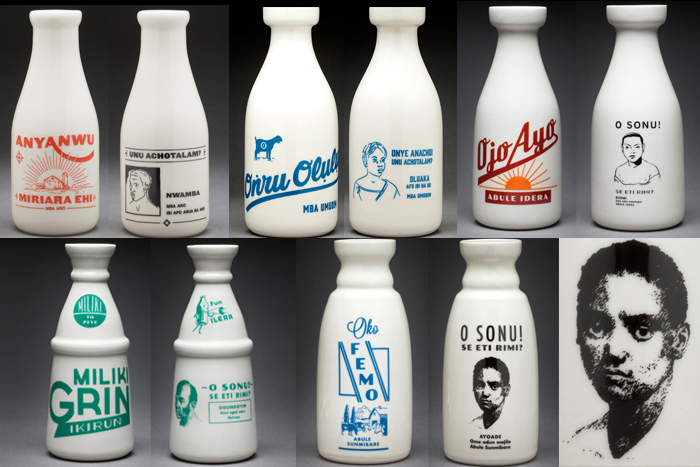