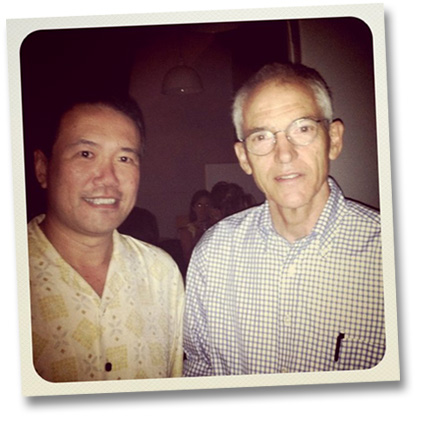 Last week, the Honolulu office was honored with a visit by graphic designer Chris Pullman (former WGBH Art Director; Professor, Yale University School of Design) during a Wall-to-Wall First Friday Happy Hour, no less. We got to chat about work, motion graphics, humor in design, our own experiments in television and AIGA. Mr. Pullman has won not one but two of the highest possible honors from AIGA. The first was the Corporate Leadership Award, which the company he shaped, Boston public broadcasting network WGBH, won in 1985. In 2002 Mr. Pullman received the AIGA Medal for his career as a designer and teacher. Mr. Pullman was in town for the opening of "Green-House-Divided," works by his wife, photographer Esther Pullman, at the Pegge Hopper Gallery up the street. (Check out her show through the month of April!)